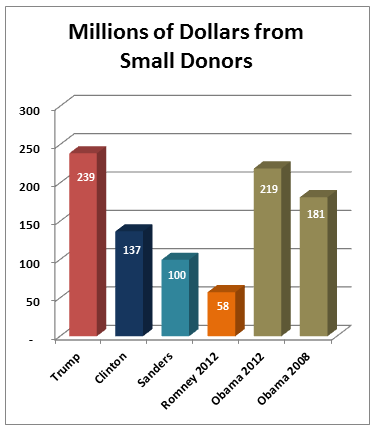 The Campaign Finance Institute just released an analysis of FEC filings for the 2016 election. You may remember Bernie Sanders bragging about the money he was raking in from small donors at an average of $27 each. Well, Hillary Clinton beat him in small donations. And Trump beat them both – combined.

Not only did Trump raise more small donor money, after initially financing his campaign himself, small donors ended up paying over two-thirds of campaign expenses, far more then even Bernie Sanders. Further evidence that Trump may have emerged victorious no matter who ran against him.

America has a problem and President Trump is the symptom. So many have tried to spin Trump’s victory as the failure of one person or another to fight hard enough, or well. Trump’s win was not a failure of any individual or organization. This was a failure of the American mentality.

If Trump’s out sized small donor performance, the Republican electorate’s sudden love for Vladimir Putin,  and the vilification of Hillary Clinton, a woman who has been globally most admired for twenty years, and who left office only a few years before with a record high approval rating aren’t enough to convince you of this, nothing will.

There is a significant segment of the population that is only interested in peace, prosperity, and liberty for those they approve of. Sure, Putin has had people run off the road and irradiated with polonium. You can’t make an omelette without breaking eggs.

Constant fear mongering, the denigration of our culture of education, and the creeping pervasiveness of profiteering that demands more hours of work every week to survive, all combine to create a citizenry that is afraid to think, doesn’t know what to think, and anyway has no time left in the day for thinking.

So people rely on tv and their emotions, and we have to listen as people talk about how they “feel” about political candidates. They cling to their religion and their guns, and when someone offers them a value meal candidate that looks familiar, or makes them ‘feel’ good, they choose the #4. Large.

This only works because we have fallen into the habit of excusing the behavior of our own tribe, and focusing on the value meal menu instead of facing the difficult questions about what kind of society we want and where we want to see our country in the future. Pre-packaged candidates and causes. And no one cares really, as long as they help us figure out which side the other guy is on.

You choose Planned Parenthood, I choose a pipeline.

There is only one way forward that holds any hope. Revolution does not start at the Oval Office, from the top down. The only way forward is for those with vision to start locally, find allies, and start doing things the right way. That means building our society on cooperation, education, sustainability, and liberty.