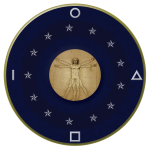 Early voting for this November’s election begins in Florida this Monday October 24th.  Besides the election of the President, there are 40 offices up for vote. The number of offices on your ballot will vary depending on where you live. By now you may have received a sample ballot in the mail. If not, you can look yours up here, or go to your county’s elections department website.

Below are recommendations for voting this year. This article is written by a progressive, or what some would describe more generally as a lefty, so most of the ballot is easy: vote Democrat, not Republican.

The reason is simple: for all the talk of blue states and red states, almost every state is red. Yes, many states go reliably for Democratic presidential nominees, but when you look at the state governments, you find that the majority of politicians across the country are Republican. 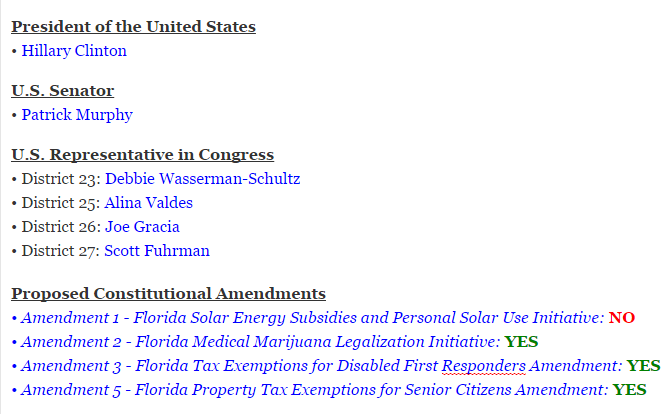 Florida, in particular, is a Republican trifecta, holding the governorship, the state senate, and the state house. That means fracking, increased cancer-causing chemicals in our water, no expansion of medicaid under the Affordable Care Act, no high speed rail, and very little action on climate change.

So vote Democrat all the way down the ballot.

In Florida, Judges either win elections, or are nominated by a commission and appointed by the governor. So even if Judges are removed, the new appointees will likely be favored by Republicans. However, in the Supreme Court and Courts of Appeal, a new appointee only serves a year before facing a retention election. Five of those judges are on the ballot this year. If they are retained, they then serve a 6 year term. So voting against retaining partisan judges now limits the length of time the court is under Republican influence.

• Charles T. Canady: NO
Republican appointee, only justice to dissent on requiring death sentences to be unanimous, on Donald Trump’s list of potential Supreme Court nominees, allowed deceptive Amendment 1 on the ballot.

• Edwin A. Scales: NO
Republican appointee.

Local seats, for example on Community Development Districts, are highly local. I will not recommend individuals here. This is something that if it directly concerns you, in my opinion you should know the issues, or leave them blank and let those who do decide. I don’t think it ethical to guess.

Local charter amendments are generally a matter of principle, even if you do not fully understand the amendment.