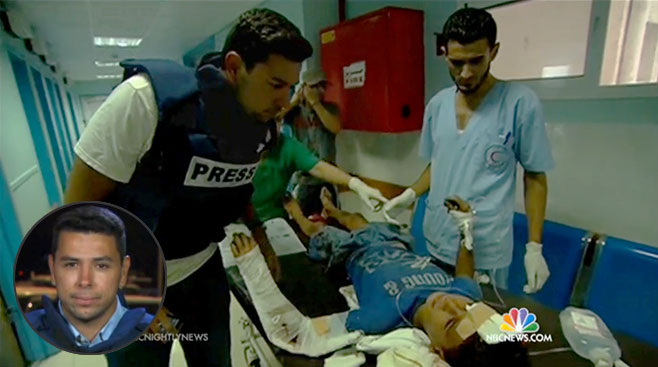 Ayman Mohyeldin, the NBC News correspondent who personally witnessed yesterday’s killing by Israel of four Palestinian boys on a Gazan beach and who has received widespread praise for his brave and innovative coverage of the conflict, has been told by NBC executives to leave Gaza immediately. According to an NBC source upset at his treatment, the executives claimed the decision was motivated by “security concerns” as Israel prepares a ground invasion, a claim repeated to me by an NBC executive. But late yesterday, NBC sent another correspondent, Richard Engel, along with an American producer who has never been to Gaza and speaks no Arabic, into Gaza to cover the ongoing Israeli assault (both Mohyeldin and Engel speak Arabic).

Mohyeldin is an Egyptian-American with extensive experience reporting on that region. He has covered dozens of major Middle East events in the last decade for CNN, NBC and Al Jazeera English, where his reporting on the 2008 Israeli assault on Gaza made him a star of the network. NBC aggressively pursued him to leave Al Jazeera, paying him far more than the standard salary for its on-air correspondents.

Yesterday, Mohyeldin witnessed and then reported on the brutal killing by Israeli planes of four young boys as they played soccer on a beach in Gaza City. He was instrumental, both in social media and on the air, in conveying to the world the visceral horror of the attack.

via NBC News Pulls Veteran Reporter from Gaza After Witnessing Israeli Attack on Children – The Intercept.