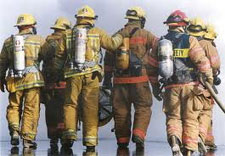 Last week, two Senate Democrats joined Senate Republicans to filubuster President Obama’s jobs plan, even though analysts have found that it could add 1.9 million jobs next year. Now, Democratic lawmakers have decided to introduce Obama’s plan piece-by-piece, beginning with Obama’s $35 billion aid package “to help state and local governments provide funding for teachers, police officers and firefighters” that would create or save about 400,000 jobs.

The first measure will be well received by the public, as a new CNN poll found that, for the past two months, about 75 percent of the American people support this measure: