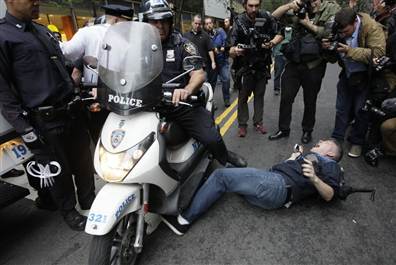 The demonstrators in New York began to move toward Wall Street after it was revealed the owners of Zuccotti Park — home to the protest camp — had ditched a plan to clean the park that some claimed was a pretext to evict them.

NBC News reported that police used the scooters to try to force protesters off of the street at several locations on Wall Street and Broadway.

Despite police efforts, some protesters managed to gather at the Stock Exchange, NBC News said.

via Clashes as Occupy protesters march on Wall Street – US news – Life – msnbc.com.