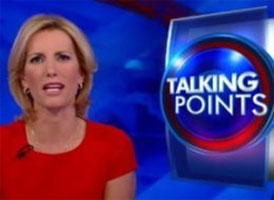 Right-wing radio host and Fox contributor Laura Ingraham makes a living from race-baiting when it comes to the president. Like many of her conservative cohorts, Ingraham often insists that much of Obama’s success is solely derived from the fact that he is African-American. Yesterday on her radio show, Ingraham offered Obama’s rise to the presidency as a perfect example of “the problem with affirmative action.” This is “what happens when individuals get pushed into positions, or elevated to positions for which they’re not qualified,” she said. “People get pushed, pushed, pushed farther than their abilities can match the position, and then they just keep failing.” All “because we had such a yearning for history,” she added.

via Ingraham Suggests Cain Would Be The Real First Black President Because Obama Has White Relatives | ThinkProgress.