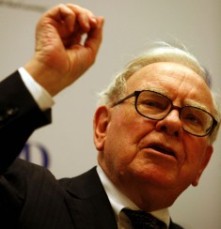 Republicans have met the Buffett rule with universal derision, calling it “class warfare.” “If it’s not class warfare, it’s highway robbery,” said 2012 GOP presidential candidate Herman Cain. “Pick my pockets, because that’s what he’s doing!” As it turns out, Cain’s much-touted 999 tax plan would basically do the opposite of the Buffett rule, driving Buffett’s already low tax rate down to new depths:

If the “9-9-9″ tax plan promoted by Herman Cain, a leading Republican presidential candidate, had been the law of the land last year, Warren Buffett would very likely have paid no income taxes, according to an analysis prepared for Yahoo News and The Lookout by the American Institute of Certified Public Accountants. At most, Buffett would have paid taxes on just 1 percent of his income.