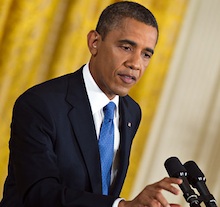 Last week, Rep. Cliff Stearns (R-FL) said “We can’t compete with China to make solar panels and wind turbines.”  As Climate Progress noted, this defeatism is  un-American in every respect.

I heard there was a Republican member of Congress who is engaging in oversight on this. And despite the fact that all of them in the past have been supportive of this loan guarantee program, he concluded, “You know what? We can’t compete against China when it comes to solar energy.”

Well, you know what?

I don’t buy that. I’m not going to surrender to other countries the technological leads that can end up determining whether or not we are building a strong middle class in this country.