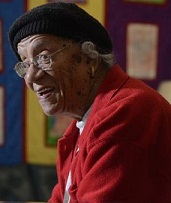 Swept up in the craze of preventing widespread voter fraud that doesn’t actually exist, Tennessee Republicans passed a voter identification law this year that they claimed would put an end to fraud and ensure fair elections. Like similar laws in other states, Tennessee’s version has come under scrutiny from voting rights advocates, civil rights groups like the NAACP and ACLU, and even Democratic senators, who oppose the laws because they will disenfranchise poor, elderly, and minority voters who are less likely to have photo IDs.

The state now has evidence that that will be the case. Dorothy Cooper, a 96-year-old Chattanooga resident who says she has voted in every election but one since she became eligible to vote, wanted to ensure she’d have the necessary ID to vote in next year’s elections, when Tennessee’s law goes into effect. But when she went to apply for the ID, she was denied, the Chattanooga Times Free Press reports:

via 96-Year-Old Tennessee Woman Denied Voter ID Because She Didn’t Have Her Marriage License | ThinkProgress.