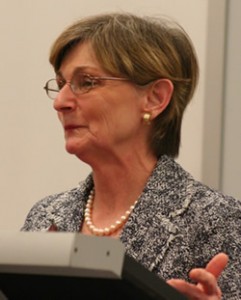 The Fifth Circuit is probably the most conservative federal appeals court in the country. It recently sanctioned a cheerleader and alleged rape victim because she sued the school district that required her to cheer for her alleged rapist. Its judges frequently attend “junkets for judges” hosted by an oil-industry funded group. And the court has developed such a reputation as a safe haven for the oil industry that the House GOP recently tried to shift many important oil drilling lawsuits into this court.

Few people capture the essence of the Fifth Circuit better than its chief judge, Edith Jones. During a recent court hearing considering a criminal defendant’s drug conviction, Jones became incensed because she believed one of her few left-of-center colleagues was asking too many questions, and she angrily cut him off:

JUDGE DENNIS: Can I, can I, can I ask a question?

via During Court Hearing, Conservative Fifth Circuit Chief Judge Shouts Down Progressive Colleague, Telling Him To ‘Shut Up’ | ThinkProgress.