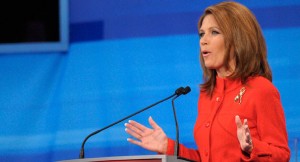 At Thursday night’s Republican presidential debate, Rep. Michele Bachmann R-MN proposed the elimination of all taxes, but then added that the government did need some money to run.“You earned every dollar, you should get to keep every dollar that you earned,” the candidate said. “That’s your money, that’s not the government’s money.”

via Bachmann proposes to eliminate all taxes | Raw Replay.